Dr. Michelle gross was born and raised in Kitchener Ontario. She attended St. Mary’s High School, then went on to the University of Waterloo where she received her Bachelor of Science undergrad degree in Health Studies. As an active participant in a variety of sports throughout grade school, high school and university (swimming, diving, gymnastics, cheerleading, cross country running, cross country skiing, etc.), she experienced her share of injuries.

Her first experience with Chiropractic happened as a result of one of these injuries. After a serious fall causing an injury to her neck, she started seeking treatment from Dr. Harold Paisley in Waterloo. The treatments provided so much relief that it piqued her interest in what chiropractic was all about, so she began to do a bit of research to learn more. It was Dr. Paisley who suggested she consider applying to chiropractic college.

Dr. Gross had always been interested in sciences, and from a very young age, knew she wanted a career in health care. Research about the chiropractic profession, coupled with her own very positive experience with chiropractic, made the decision an easy one. Dr. Gross began her studies at the Canadian Memorial Chiropractic College in Toronto in 1995. It was not long after that she met her future husband and business partner, Dr. Murray Townsend, who was completing his final year at chiropractic college at the time.

Four years later was a busy time, with graduation from chiropractic college, the purchase of a practice in Mount Forest and Arthur, and a wedding, all taking place within five months! Drs. Gross and Townsend have been happily married and have very comfortably settled into life in Mount Forest over the past number of years. They are now enjoying a very supportive community, great relationships with many other health professionals in the area, and are blessed to be raising two wonderful boys. These days, when she is not practicing chiropractic or taking care of her two boys, Dr. Gross is often teaching classes and running workshops on essential oils, as well as teaching and mentoring others in building essential oil businesses of their own.

Dr. Murray Townsend began practicing in Mount Forest in May 1999, after starting to practice in Arthur in February 1999 with the practice’s previous owner, Dr. David Gohn. It was shortly after that, in September 1999, that his soon-to-be wife, Dr. Michelle Gross, joined him. In 2002, both doctors continued practicing solely in Mount Forest.

Dr. Townsend entered the Canadian Memorial Chiropractic College in Toronto after graduating from Wilfrid Laurier University in Waterloo. He graduated from CMCC in 1996.

Dr. Townsend first practiced in Clinton with Drs. Laurie Colquhoun and Carolyn Wood. It was in this practice that he had been a patient (since age 4) of Dr. Colquhoun and Dr. Wood’s father, Dr. Ken Wood.

The choice of being a chiropractor stemmed from the experiences of living on a farm near Seaforth and playing sports (especially hockey, curling and baseball), and the positive influence as a chiropractic patient in Clinton.

Dr. Townsend continues to have an interest in a variety of sports, and treats patients that are involved in the traditional hockey and baseball, to those who train for MMA fighting or run marathons.

Whether a sports injury or strains from picking stones in the spring, Dr. Townsend enjoys helping all the members of the community. As such, it has been particularly rewarding to develop a relationship with the other health care providers in the community to help better serve patients` needs. In 2004-2006, our office participated in a `Collaborative Practice Study between Physicians and Chiropractors`. This led to a more formal and cooperative interaction with the Mount Forest physicians and Family Health Team. Since 2015-2016, our office has been fortunate enough to be included in the Ontario Government`s Low Back Pain Care initiative, continuing our focus on collaborative patient care.

Drs. Townsend and Gross live in Mount Forest with their sons Joey and John. 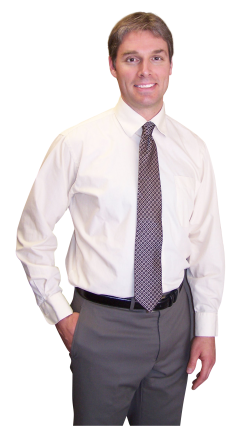